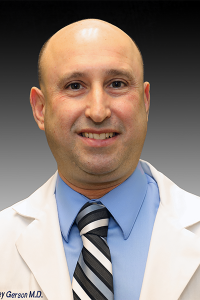 Dr. Gerson, a native New Yorker, attended college at CUNY – Brooklyn College where he received his Bachelors Degree in Chemistry in 1986.  He then went on to study medicine at SUNY – Syracuse where he obtained his Medical Degree in 1990.  Thereafter he completed his residency in Internal Medicine at Allegheny General Hospital in Pittsburgh, Pennsylvania in 1993 and his Gastroenterology Fellowship at Shadyside Hospital, also in Pittsburgh, in 1995.  Upon completing his training, he relocated back to New York State where he established a private practice of Gastroenterology in Albany, NY.

Dr. Gerson has treated thousands of patients in the Capital District for over 20 years, covering the vast scope of gastrointestinal conditions.  In 2015 he merged his practice with Albany Gastroenterology Consultants, bringing a wealth of experience and knowledge to the group.  He continues to see new and established patients at our main office on Washington Avenue as well as our new satellite location in Clifton Park.