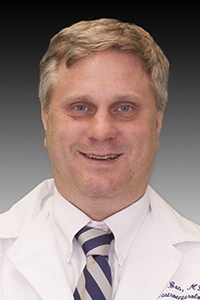 Dr. Matthew J. Ben was born in Danielson, CT and graduated Valedictorian of his class from Killingly High School in 1984.  He was all-state in Football and Track and was a recruited athlete to Princeton University and matriculated in the fall of 1984.  As a Biology major, he had publications in Nucleic Acids Research on the topic of building a DNA library from an unsequenced genome.  Upon graduation from Princeton in 1989, he was commissioned as a second lieutenant in the United States Army and took an educational delay to attend Albany Medical College in 1989.

After graduating from Albany Medical College in 1993 and doing an Internship in Internal Medicine from 1993-1994 at Albany Medical Center, Dr. Ben then served his four-year commitment at Fort Drum, NY from 1994-1998.  During that time period, he was deployed to Haiti, from 1994-1995 and was the Acting Commander of the Connors Troop Medical Clinic until reassigned to the Watervliet Arsenal from 1995-1998. Upon his return to Albany Medical Center from 1998-2000, Dr. Ben served as one of the Chiefs of Internal Medicine in 2000.

Dr. Ben attended Brigham and Woman’s Hospital, a teaching hospital of Harvard, from 2000-2003 and was selected twice to teach the Harvard Medical Students GI Physiology.  While at Brigham and Woman’s Hospital, he developed an interest in liver disease and participated in several drug trials for Hepatitis C, the largest of which was the HALT-C Trial.

Dr. Ben has been with Albany Gastroenterology Consultants since July of 2003 and has maintained his interest in liver disease as well as General Gastroenterology.  He has expertise in Hepatitis B, Hepatitis C, cirrhosis, portal hypertension, and liver transplantation.  He has lectured numerous times to local physicians on liver disease and is a voice for the Capital District upon Liver Transplantation with unique relationships with Massachusetts General Hospital in Boston and the combined Liver Transplant program of Weill Cornell Medical Center and Columbian Presbyterian Hospital of New York City.  Locally, he has served on the St. Peter’s Institutional Review Board since 2016 and has been on the P&T Committee with CDPHP since 2015.