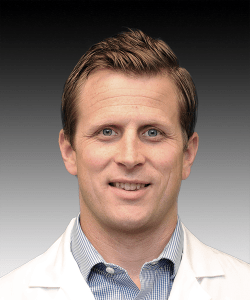 Dr. Warndorf was born and raised in Mansfield, Ohio. He earned his Bachelor’s degree at Wittenberg University in 2002, with a major in biology and a minor in English literature. He then moved to Washington DC and earned his Master’s degree in biology at American University in 2004. He also worked at the Naval Medical Research Center, as a member of a research team evaluating the efficacy of an “artificial blood” product in trauma models.

He returned to the Buckeye state in 2005 to earn his medical degree from Northeast Ohio Medical University. He graduated from medical school in 2009 and was inducted into the Alpha Omega Alpha medical honor society. He then completed his internal medicine training at Dartmouth-Hitchcock Medical Center in 2012. He went on to complete his gastroenterology, hepatology, and nutrition fellowship at the University of Pittsburgh Medical Center in 2015 where he served as chief fellow. With an interest in pancreaticobiliary disorders and therapeutic endoscopy, Dr. Warndorf then completed an advanced interventional endoscopy fellowship at Maine Medical Center in 2016.

Following his advanced training, Dr. Warndorf joined Albany Gastroenterology Consultants in 2016. Although he has particular interests in pancreaticobiliary disorders and therapeutic endoscopy, he has a wide clinical practice including general gastroenterology and hepatology. He performs a wide variety of procedures including diagnostic and therapeutic endoscopic ultrasound, ERCP including cholangiopancreatoscopy, EGD and colonoscopy, endoscopic mucosal resection, radiofrequency ablation of dysplastic Barrett’s, luminal stenting, and single balloon enteroscopy.

In his free time, he enjoys spending time with his family, reading, and doing anything in the great outdoors.