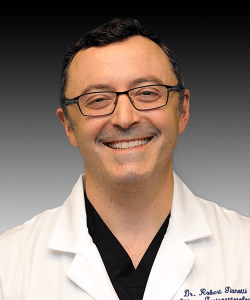 Dr. Robert Gianotti graduated from Cornell University where he majored in biology and animal behavior.  He then worked for the U.S. Forest Service in Washington State as a wilderness ranger and trail technician prior to becoming a clinical researcher at the Rockefeller University in Manhattan.  While at Rockefeller, he studied the neurophysiology of addiction and published research on the molecular biology of opiates in the human brain. He then went on to earn his medical degree from Weill Cornell Medical College.  During his fourth year of medical school he studied overseas at the Bugando Medical Center in Mwanza, Tanzania.

Dr. Gianotti completed his internship and residency in internal medicine at NYU Medical Center and Bellevue Hospital in New York City from 2008-2011.  He served as the chief medical resident from 2011-2012. While at NYU he was engaged in research in liver cirrhosis and portal hypertension. He remained at NYU where he practiced hospital medicine for one year prior to starting his fellowship in gastroenterology and hepatology at Beth Israel Deaconess Medical Center of Harvard University in Boston.

While studying at Harvard, Dr. Gianotti became interested in and did research in inflammatory bowel disease. He developed a specialization in treating patients with inflammatory bowel disease and conducted research in the role of the microbiome and fecal microbiota transplantation in the prevention of post-operative Crohn disease recurrence. In addition, he had extensive training in esophageal motility and acid reflux diagnostics. He served at the associate editor for the American College of Gastroenterology Case Reports Journal and taught extensively in the gastroenterology curriculum at Harvard Medical School.

Dr. Gianotti is board certified in internal medicine and gastroenterology.  He is a member of the American Gastroenterology Association, American College of Gastroenterology, and the Crohn’s and Colitis Foundation of America. In his free time he loves spending time with his family, hiking and trail running in the Catskills and Adirondacks. He has completed multiple half marathons on his way to finally try his hand at a marathon and beyond in 2021.