Skip to content
Important Notice: The health and safety of our patients, providers, and staff are important to us. Due to the outbreak of the COVID-19, we are taking precautions as advised by the Department of Health. If you are currently scheduled for an appointment and have recently traveled, have been in contact with someone who has traveled, and/or you have symptoms of fever, cough, or respiratory issues, please call our office at 518-533-5000 before coming to your appointment. If you are calling to schedule an appointment, please advise our staff of this information so you may be scheduled appropriately. Please note, unless absolutely medically necessary, no extra persons are allowed into the office at this time. Thank you for your understanding! 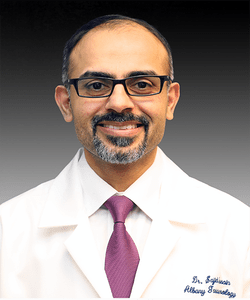 He moved to the Albany area in 2013 as GI faculty at the Stratton VA Medical Center and was an Assistant Professor of Medicine at Albany Medical College.  He pursued advanced therapeutic endoscopy training at St. Peter’s Hospital in Albany before joining Albany Gastroenterology Consultants in 2017.

Dr. Hussain is board certified in Clinical Nutrition and Gastroenterology. His clinical interests include pancreatic malignancies and biliary disease.  He specializes in therapeutic endoscopy including Endoscopic Mucosal Resection (EMR), Endoscopic retrograde cholangiopancreatography (ERCP), Endoscopic Ultrasound (EUS), and treatment of Barrett’s esophagus. In addition to practicing medicine, he enjoys spending time with his family and watching soccer.